Darkside Everywhere There Is! A study in OSL by Ant Con!

A study in OSL – PRELUDE

I have grown to be good friends with Anthony otherwise known as Ant Con over the last year or two, indeed my friendship with him and the Greek Crew continues to grow and I really look forward to spending time with them all at shows. Ant is now a valued member of Michael Kontraros Collectibles, a figure painter of growing skill and an amateur sculptor, his love for the hobby and it’s community is beyond doubt. When I saw this piece online and at Euromilitaire 2016, I really wanted him to tell us a little about it.

Which he agreed to and promptly sent the article and images, unfortunately I am a little chaotic in my organisation and rely mostly on my somewhat dodgy memory, hence why I am only now putting this article together, sorry bro! (Ed). Although there are no step by step images as I asked about the article after the painting was completed, what follows does give some nice insight into his thought process for creating the atmosphere and lighting effects of this little vignette. 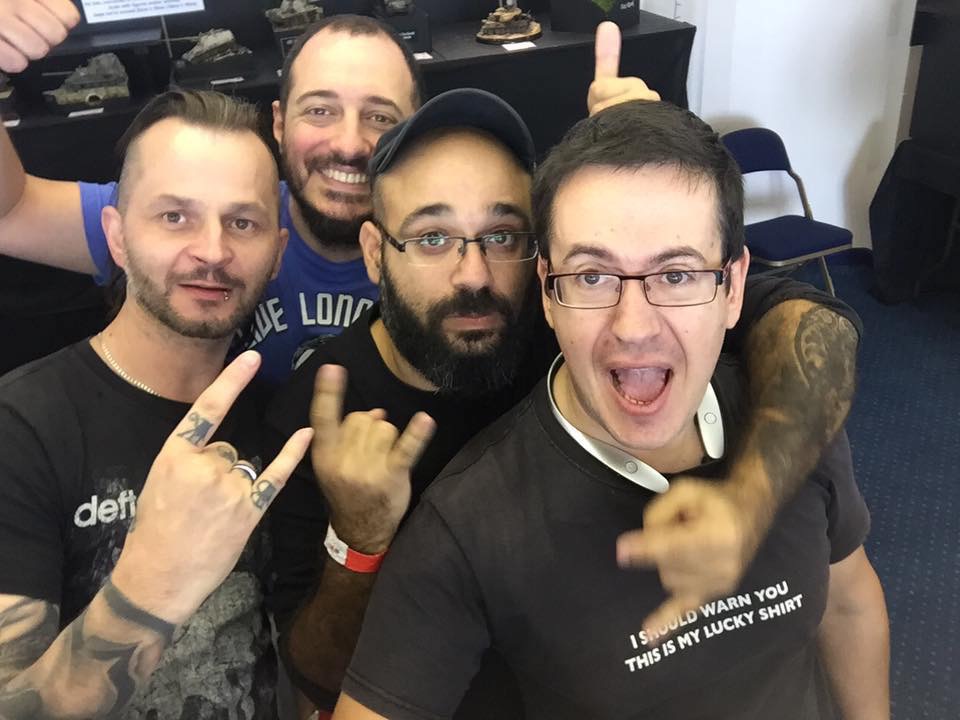 I will start with two important facts about this project:

Now that these two important facts are out of the way, let’s get started with how this small vignette was completed.

For me, the most important part of any project is the concept. If I can visualise what I want to achieve it is easier for me to complete the task. Although in episodes IV, V and VI we never see Yoda wield his light sabre, in episode II, Yoda is like turtle on drugs (quite a revelation), and although we don’t know much about Yoda’s life, after 700 years I am sure he went through his own trials and tribulations with the dark side. 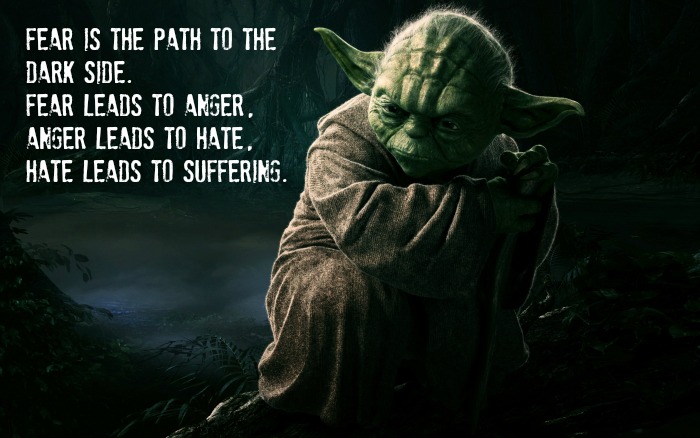 Yoda in his earlier years fought with the dark side, not only physically but mentally – so close your eyes and imagine this: Yoda is surrounded by the darkness, it is drenched in the power of the dark side, fear, anger, jealousy, evil, POWER, he can feel it, he can see it, he can touch it – it reaches out to grab him – drag him into the abyss. Yet he remains strong, steadfast, wielding his green light-sabre, a source of light in the darkness, a beacon of hope amongst the futility of the dark side, he struggles, he fights, he overcomes.

This is a classic scene of dark versus light – good versus evil. The colour contrast would have to do all the work of telling the story. In order to achieve this Yoda would have to be set against a dark background, this would allow me to play a great deal with the lighting. 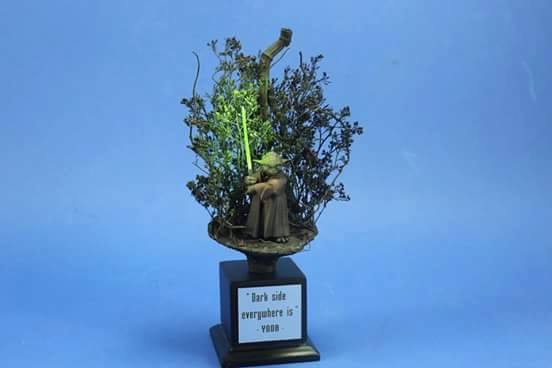 After much thought about the background setting, I concluded that it would have to feel as if it is encroaching and enveloping Yoda, therefore it could not be static – part of a space station, wall or building – I wanted the background to give the sensation of movement and fluidity. I rummaged through my tool box and found some thin branches with leaves I had purchased some time ago, I also found some roots and pieces of oddly shaped bamboo – perfect. I had my background, now for the base.

I was lucky enough to have been at a seminar given by Michael Kontraros at the Star Club the previous week, where he had demonstrated how to create a base quickly and easily with Polyester filler. After two attempts, I managed to create the correct size and thickness for the base. Other than the horrendous smell, Polyester filler is a cheap, light and quick drying material that is perfect for such builds.

So, the base was ready, the foliage was selected and Yoda had been primed. On to assembly and painting.

I felt it was important to complete the base/groundwork first as it was this that would determine the lighting and painting of Yoda. About 15 small holes were drilled carefully into the base and the branches slowly and painstakingly inserted – a game of musical chairs to make sure that the correct branch was in the correct spot, providing the desired effect. Branches, roots and bamboo were all glued into place and sprayed with a couple layers of varnish – Humbrol spray matt varnish (to further secure the small leaves in place). Once I was happy that everything would stay where it was supposed to, two passes of black primer were applied – Humbrol spray black matt. Yoda was positioned and holes drilled in the base for the metal rods that would hold Yoda. 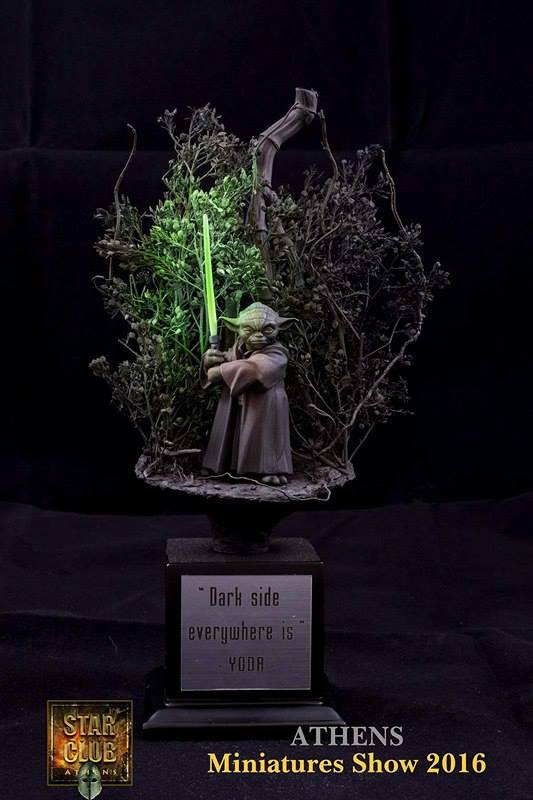 This was the first time I would apply so much directional lighting to a figure, as well as simultaneously trying to create a glowing florescent effect. In order to create realistic effects some very important decisions had to be taken very early on.

Yoda robes – First and most important decision, was the extent of the lighting from the blade and it’s reach. It was decided that the lighting from the blade would affect about a third of Yoda and the remaining areas would gradually get darker and darker. As you can see there is a distinct “area” where Yoda’s face and robes are affected by the light from the blade (the closer the blade the more distinct the colour – even taking over from Yoda’s natural colour), the remaining areas start to darken gradually. I chose a dark brown instead of black as I still wanted to maintain a semblance of warmth in the scene. 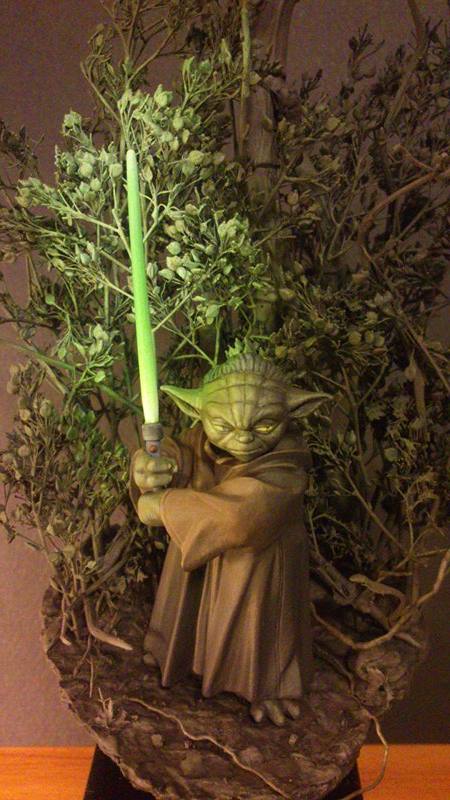 Yoda lightsabre – In order to bring out the brightness the blade of the light-sabre was first painted in pure silver (2 coats). Then a single coat of off white was applied – always making sure that the application by brush was smooth. Once the white was dry, it was time to get the airbrush out and take a leap of faith with the florescent green. Four layers were applied gradually brightening the beam in certain areas by mixing the same off white previously used into the florescent green. The tip and the base of the blade were the whitest, to indicate the hottest and brightest points.

Groundwork/Surroundings – With Yoda and the light-sabre complete it was time for the final and most important step – the lighting of the background/foliage – this would make or break the piece, as if it was not done correctly it would look above all, wrong and fake. First step was to airbrush the entire base (ground and foliage) with the dark brown used at the darkest point on Yoda’s robes. Some very faint highlights were applied to the ground and foliage to make the details stand out a bit more.

Taking into account the position of Yoda’s blade, a very thin layer of green was applied to the foliage essentially marking the extended reach of the light (almost bringing out the leave’s true colour). As with the blade itself, slowly and steadily and with thin applications of the airbrush, the colour tones were gradually lightened, culminating with almost white patches where the light is at its strongest. It is the combination of the gradient effects on the green colour and the directional lighting that set the mood and tone for this particular piece.

For my first attempt at this type of painting (airbrush, directional lighting, highlights etc.), I am extremely happy with the finished effect. It was a great learning curve for me and a great deal of fun playing with the light. So much so, that I hope in the future to duplicate and improve my efforts with such lighting effects. Thank you for reading guys n gals! I would also like to say a big thankyou to Jay for the invite to collaborate on this growing resource!