Some of the best painters out there will tell you to plan ahead when doing a big piece. Make sure to do your homework on background. Get some images that inspire and support your idea. Maybe even do some rough sketching on paper, or with Photoshop even. Work out your idea even before you get started and frankly: they are right. I even say so in my teachings.

However, it is not always how things work with me. Often, I have barely a vague idea, I just start, and I will find stuff out along the way. Now trust me, this is by far a weird thing. I imagine that many an artist – in ANY field – will do this once in a while. So if you recognize yourself: don’t be alarmed. To give some degree of what it is like for me, I’d like to lay bare my thoughts during the process of making my Android Alas.

It all started at the Scale Model Challenge 2016, where I felt I wanted to challenge myself a bit by stepping (slightly) out of the comfort zone, and try out some new subjects. So I picked up some random things to do for the next year, like a “flat figure” (really fun by the way!), and some busts. I took the Alas model from Broken Toad because I felt I could do something interesting with it, but at the time I was thinking about swapping the skull that she was originally holding with a heart, bloody and all, with gore and all. Yeah, gross.

I kept that idea for quite a while, without really getting to work with it. In the meantime, I saw a couple of amazing painted versions, and even read about someone who wanted to…yeah: swap the skull for a heart. Damn, idea ninja’ed! I really want to have some originality when I pick up such a model, I want to do something with it, to it, change it, to at least stand out amongst the other well painted ones.

By the end of this year, a new idea popped after I saw Ghost in the Shell. As a big fan of Steam Punk, I thought of creating an android with a steam punk twist. The only items on my plan: create panel lines like androids have in SF movies, get a look at her clockwork insides, and let her hold an old pocket watch instead of the skull (this duality really fired up my inspiration: “Do I live, or am I like this watch?”). 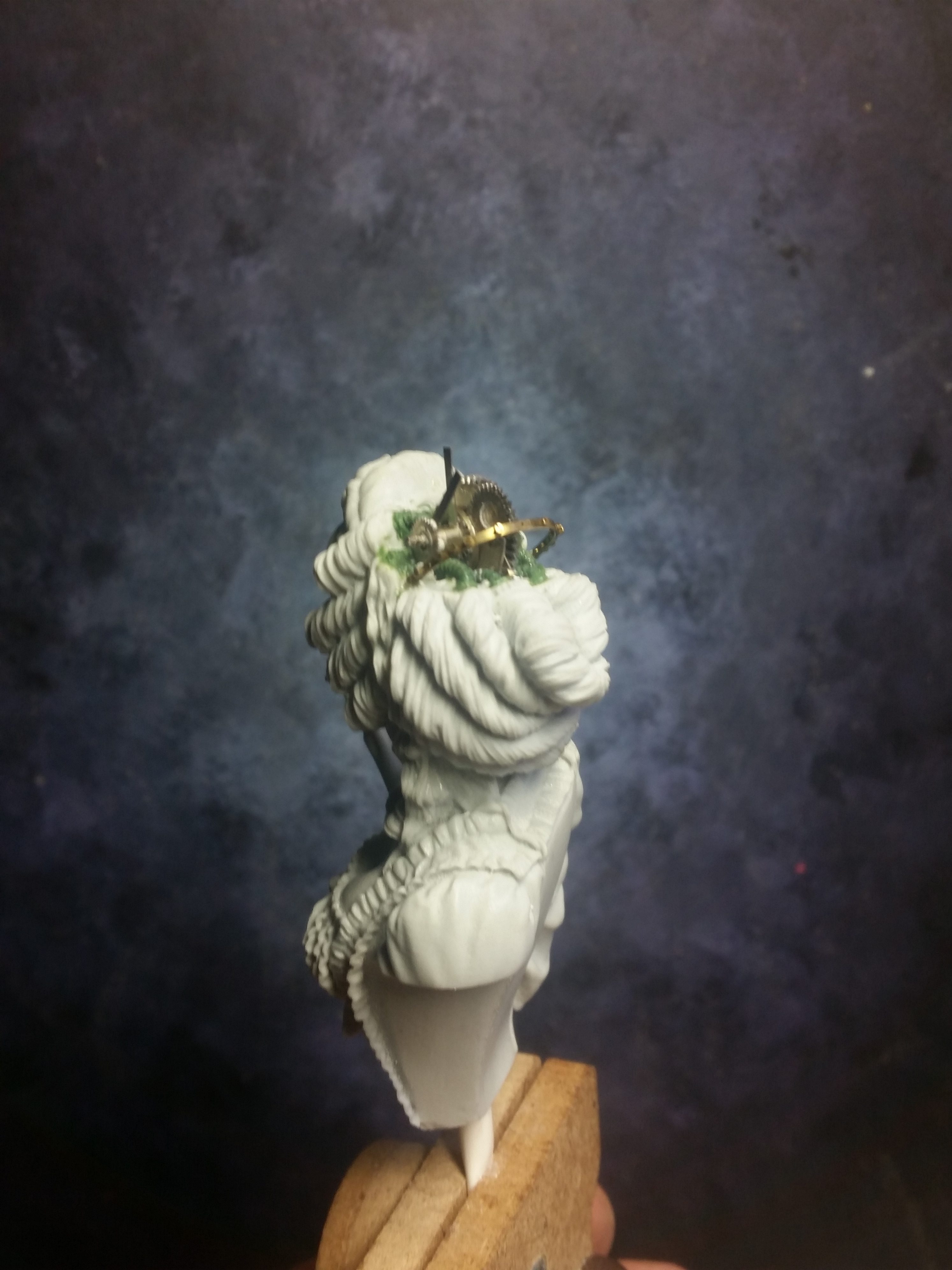 I set to work. I opened the box, and saw that a part of the big wig was a separate piece. I could clearly envision how, if I left this piece out, I would have the space and correct location for that clockwork to show. I knew I had to create some extra space for cogs and stuff to be placed, so I took a drill and a dremel and just ‘hacked’ away. I took my box with Steam Punk gear (cogs and the like), and just randomly started to glue stuff together. This is the part where the lack of planning and designing often gets tricky and might mess up the whole process. I am depending a lot on sheer luck of creating something that works well. In this case, it really meant recreating the clockwork a couple of times, extra drilling in the skull, glueing, ripping it off again and starting over, etc. It can get very hard on your motivation in such times, but eventually I did have something that I felt I could pull off. I added some tubing, and decided that other details would be solved with paintwork.

Time for the real work: Undercoat, and get some ‘basic’ skin tones on the model with the airbrush (thanks Pepa for that workshop waaay back!). But this time, during airbrushing, I thought of these semi-transparent panels for futuristic androids (like in the movie I, Robot), hinting flesh colours underneath. So I finished with some white glaIzing over all the skin. It did not do the thing I envisioned, but merely created a much lighter skintone. Too bad, but still, I could work with that. I always want to add to airbrushwork with a regular paint brush, adding more depth here, creating a bit more life there, some different tones here and there, etc. I really love doing female skin and faces these past couple of years, and this really brought me joy too.

Then the moment to put on the panel lines arrived. I was so nervous to do it, scared to mess the nice work I did so far, that at this time, I decided to take a more sensible course. I googled a lot of images for inspiration, then took a good photo of my model, in a proper angle, and projected it on my laptop. I placed some tracing paper on the screen, and drew what I thought would be cool. Checking back with a painting buddy for feedback, I painted the lines with intense focus – this has to be as tight as I can possibly paint, or it would fail utterly. As soon as I was done, I knew: this is awesome!

Probably the biggest hurdle was done, but now I faced a new challenge: what should the rest of the colour scheme be? It should not be too distracting from the theme, create a good colour balance overall, and still be believable. I saw and heard a lot of suggestions, but in the end felt the most for a red velvet dress with gold/dull yellow ruffles, and ‘plain’ white wig (with a hint of blue-purple in the shades). Maybe even try some gold stitched pattern on the velvet (which did not happen in the end due to lack of time).

In between painting sessions I gave the pocket watch some thought. Where to get it? I actually knew that I would not be able to buy it somewhere, and had to create one myself. Now I am not very secure about my own sculpting skills, but still, I HAD TO. The only thing I could do is give it my all, and be very secure about details. It was a real process of doing one small bit, then leaving it for days to figure out the next step, and the next and so on. Again: I solved problems as I went along. And actually I needed to start over after a few times, but in the end, and especially after having it painted, it had the right feel. I tried fitting it in her hand, but experienced new problems: if I placed the watch on top of her fingers – like the skull was originally meant – the girl would have a hard time looking at the time piece at all. It rested at an uncomfortable angle. If I placed it more INTO her hand, the right way around (with the lid downwards), it was even weirder, and didn’t fit well. But then I found out that it would fit perfectly if placed upside down. This way she would hold it more like a pocket mirror. I felt it would even add to the story here, an android compairing itself with a time piece, finding it as alien as it is herself.

After all the painting, building, fitting and such, all it needed was some decoration on the plinth. I only had a single session of painting left before I would take it to the Scale Model Challenge, so I decided to do something minimalistic, just a few cogs on a black backdrop. It would not take the focus off of the model yet add to the feel.

So after the process, I wondered about this trial-and-error method. What are the pro’s and con’s of doing this? Well, a definite con would be that I could have been done much sooner, and maybe even technically more sound if I had done some prep and research beforehand. But as I am not a professional, where time is money, I actually did not care about this. Instead, I find that the journey was worth much more than the destination. Not having a plan meant that the project would be open to all directions all of the time. I can get bored of my own ideas if I am working on it too long, and in this way the results will continue to be a surprise even to me. This creates a lot of motivation!

As I did not win anything with the model at the competition, did this method cost me? Maybe. Maybe it could have been better built. Maybe things would fit better, look better, look tighter. But in the end all I cared for was the remarks, feedback, discussions and compliments from people who got to see her. The entire modification, the story it told, and how people would perceive it, was worth everything.

And: I had fun! Just one last thing before I go, apologies for the image quality, Jay had asked for an article after completion, so sadly I had already taken these images. Still I hope you can see what I achieved and you found some interest in my thoughts and processes.