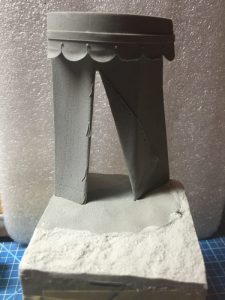 Hi everyone my name is Enrico and Jason approached me recently about sharing some of my insights as a painter. I hope to collaborate more in the future but for now let me show you my first monotone project. The idea of my first project in black and white was born by a beautiful figure in 54mm created by Mindwork Games of Matteo Di Diomede.

Secondly, I had another incentive to the realisation of this work: one evening, returning home from work by car, my attention was captured by a circus tent that had just been erected in Milan Linate. The posters advertised this new show as “The horror circus”. 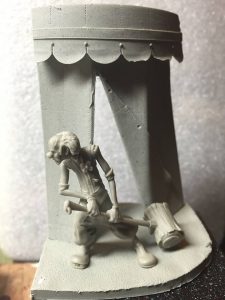 Well, now the concept had become clear in my mind and I knew what I wanted to accomplish and so I started. After all the necessary cleaning and preparation steps, I started thinking about the ambience that was bound to deliver the circus theme.

To this end, I was helped by a beautiful setting found during an exhibition in Calenzano, a commune in the Province of Florence in the Italian region of Tuscany, from the mythical Perencin.

Here is described a medieval setting but it was not hard to transform it into a more classic circus tent. So I started to prepare the ambience with setting the tent on a base and preparing the ground-works with Magic Sculpt.

After the figure and base was primed black, I began with a coat of white with airbrush to set the light areas and to have a good guide on subsequent painting phases of the tent. This sets the positioning of the lights and by default the shadows too and will guide my next processes and operations. 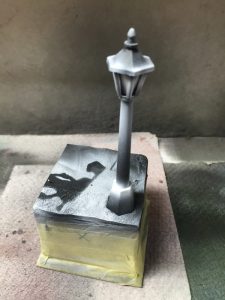 Another idea was to have a shadow projected onto the ground from the menacing clown, once he was placed under the street-lamp, it was clear that somehow it was necessary to represent its shadow on the ground. To do this I drew a shape on a sheet of paper by following the shadow of the clown projected on the ground by a small flash-light that I used for this purpose.

The torch, positioned at the same point where I have placed the lamp post and directed downward over the head of the clown, has projected accurately onto the paper shade. From here it was easy to draw its outline on paper with a pencil.

At this point, I cut out the shape of paper and, after resting on the base in the desired position, I gave a coat of white with a pass from the airbrush. After removing the paper pattern, there remained the perfect black shadow for my purpose. 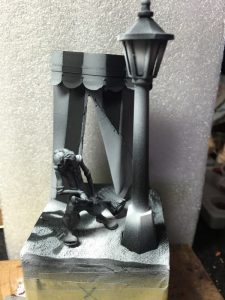 The subsequent painting phases, both of which appear in the setting, were performed entirely with oil colours. I prefer the use of oil paints, both for historical models and those of the fantasy genre. I am more comfortable with this type of medium, and now I can no longer do without it.

The scene, as already mentioned above, had to be made entirely in black and white. So I only used three colours with which I was able to create all our various intermediate shades of grey. Titanium White, Black and Ultramarine Blue (that helped me to make the various cooler hues, as the scene is set at night).

Adding the splash of colour

In the various stages of painting I continuously “played” with the three colours I had available, creating an infinite number of mixtures of grey starting from the light grey to dark.

With the various mixtures obtained I painted the various parts of the vignette and pieces of the setting and I must say it was great fun to discover new shades over and over again, each being very different. The result, in my opinion, was fair and for me I feel I accomplished what I intended.

At this point it just lacked the finishing touch. My idea for the realisation of this vignette (and others that I later realised), was to give a little touch of colour to the whole scene being completely black and white. 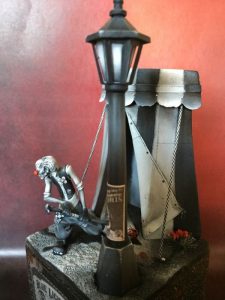 To do this, what better way to give a touch of red? Red is in itself a living colour that transmits energy, strength, and, as far as I’m concerned, it’s also my favourite colour.

So, since we are talking of a clown and saw that the scene must still be a bit gloomy and violent, the clown’s red nose was the final touch, with the addition of some splash of blood on the hammer.

Many thanks for reading, cheers
Enrico Collenzini