As some of you would have seen recently I am currently painting the Mushroom Shaman from Mindwork Games, a figure based on the concept art by Mirko Failoni.

There is no bigger honour than having the concept artist tell you that your version of a figure perfectly captures what he was trying to portray in the artwork, wow! We got into a conversation about the creative process and he agreed to provide us with a little insight along with a time-lapse video of the process for another one of his characters (Shaman of Darkness) within the series. Hope you enjoy!

By the way the series of shamans, see the gallery at the bottom, will be featured in Spectrum vol 23 and Mirko was also a nominee in best concept art for the environment of the mushroom forest (Ed).

Being a concept artist is a bit like being a chef. You put familiar ingredients that everybody already knows, together in a different way, to get a result that’s not just good, but also unexpected. There’s lots of things to consider when you’re doing concept art, obviously.

Firstly, what you’re doing concept art for – a miniature, a movie, a game, etc.

Secondly your target: is it for young kids? A niche audience, or does it have to appeal to everybody?

Then you also have to keep in mind the specific setting the concept needs to have, and so on.

To explain the process that led me to create the Mushroom Shaman, I’ll use a sped up video of another character of the series (Shaman of Darkness). What I don’t show in the video is the very first thing I do: looking for references. I spend over an hour on websites like Pinterest looking for anything inspiring, tribal masks and garments and so on. This is very important because it’s a lot of fun and it’s quite stimulating, but it’s also crucial to build your personal visual library. To come back to the chef metaphor think of it as your pantry: you have to keep it well-stocked. 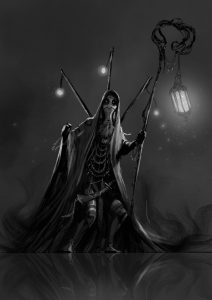 Then, the painting starts. I begin with some interesting shape that suggests the character’s pose trying to look for a sense of narrative: in this case the character almost seems to be crawling out of the dark where it comes from with a kind of hunched pose.

Then I look for the best shape to convey the message: in this case I chose a triangular shape. This way, the focus is on the head: the triangle’s point. The base instead fades out into the ground, like the Shaman is appearing out of the fog I already know I want to put there.

An important element that I decided to put in every design of the series is the staff: a symbol and summary of the whole character. In this case the staff turns into a lantern and I can also take advantage of it as a light source. Once I establish the silhouette I start to define the masses. Here, I wanted his cape to have a hood as well and to make the whole garment torn, to make it more dynamic and interesting.

After the volumes are well defined all over I start working on the design of the mask, the other repeated element for all the characters in the series. In the video you can see me exploring a bunch of designs for it before I decide to go with a more elongated kind of shape, the expression almost humorous. An important point of focus I spend time on is the dark eye holes, from which you can see the pupils shining.

Then it’s the details turn: all over I start detailing, for example putting in some net-like necklaces. I render further the cape and its smokey border, the character’s earrings and some beard-like hay on the mask. Going forward with the details I felt like the shape was a bit too simple and it was too grounded, I needed something to balance out the design so I added the wooden structure on his back with other little lights.

The atmosphere is spiritual, and to strengthen that feeling I made it so that the light seemed to emanate from fireflies. I add some final details always keeping in mind the weight of the character. An important detailing phase is the one for patterns on the body – tattoos – and mask, thinking of values and the rhythm of light and dark. For the mask I decided to paint the decorations to put even more focus on the eyes. The last thing I do is using filters and special effects to really push the mood of the whole piece.

Hope you enjoy the video and the gallery, kind regards for reading my little musing, hopefully you found it interesting or inspiring. Onwards!