“Californication” a step by step by Stavros Zouliatis 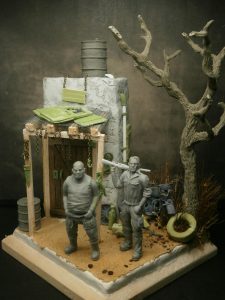 Hi, my name is Stavros Zouliatis and I’m a freelance sculptor. I started back in 2013 sculpting figures at all scales and run my own company “Miniature Tale” and I also collaborate with commissions for other companies too. I have known Jason pretty much since the beginning and I am happy he asked me to share with you one of my latest projects.

Here is a step by step tutorial about my project “Californication”.

A few words about the concept: The story is about two brothers, in the deserts of California, living in their cage, waiting to give you their services! I suspect they are not very nice men!

The final result  about terrain is ready! As you see all parts with green colour is the green stuff (scratchbuilt items), the barrels are made with polymer clay and using some metallic parts and real chains. 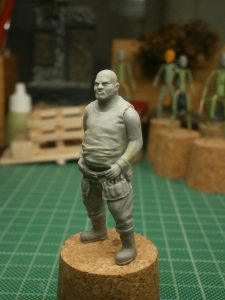 Before I’m going to bake it (Beesputty and polymer clays need to be baked to 130c and for 15 minutes) I make sure that everything on it is just perfect (from anatomy to clothes and the tools about our guy). Then I’m baking it and here is the result of our guy.

In case you might need to add something on it, you can fill in it , even if its baked and then baking in it again (the clay can be used again, more details can be added to a baked clay without destroying any previous sculpting).

So our final process have done and we are ready to put our figures into the terrain.

So this was the process of making the “Californication” project.

Hope you like it and enjoy it , as much as I did, please enjoy the full gallery below!