A Tribute to the Majestic Kong by Antonio Leveque

When I was approached by Antonio to collaborate once again after his Pinnochio piece, I simply could not turn him down. I love his unique, one off projects and to have the opportunity to share with you some of his insights and to show you his SBS process through a gallery, is a real honour and privilege. So here we go! 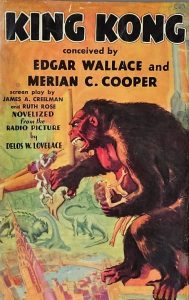 such an iconic story

“There are things that have no time or rather … they always have a time, that they are timeless!

This was my consideration and ‘identity card’ of our character out of the wondrous pen of the novelist Lovelace”.

So the question that arises is thus ‘…. why have I sculpted this piece as a tribute not only to Kong but also the writer and novelist Edgar Wallace”?

Not everyone knows that Wallace oversaw the first script (110) of the movie King Kong which enjoyed so much success that Edgar was credited as the author of the novel itself.  So knowing this hidden truth I wanted to add in my sculpture the relief of Wallace, he was the mouthpiece and creator of so much that is King Kong and his unmistakable hat make him a unique and instantly recognisable character.

The story of Kong and it’s screenplay and ownership is quite interesting in itself! First let us just recap on the King Kong story-line! 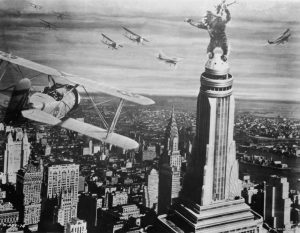 one of the most famous stills of any movie

The giant ape King Kong was actually created by Merian C. Cooper an American film maker. In the original film, our iconic creature is named just Kong, a name given to him by the inhabitants of Skull Island.

This was a “lost” island that Kong inhabits along with other prehistoric and giant animals such as Pterosaurs and Dinosaurs. In essence, an American film crew, led by Carl Denham, captures Kong and parades him as the “Eighth Wonder of the World” in New York.

As the story develops, Kong escapes and fatefully climbs the Empire State Building in an attempt to protect Ann Darrow, the actress offered up as sacrifice to Kong on Skull Island, only to fall to his death. Denham poignantly comments; “It was beauty that killed the beast”.

What is heart breaking is to know that although Wallace created the beauty and the beast theme, the overall plot structure and outline, many of the key characters and events, within the story, his untimely death cheated him of the recognition he deserved as creator of the story.

Wallace’s 110 page script was merely the first rough draft, not a final and completed shooting script. So it is fitting that Antonio pays homage to this great literary mind.

The Empire tower behind which stretches the silhouette of Kong was scratch-built with square sections carefully shaped and curved from plasti-card to fit the semi-circumference.

The tower was then fixed to the wooden base with a 1mm rod, thus holding the entire hotel and emerges at the top end of the contoured tip of the scene working as an antenna, which you can see in front of the gorilla’s body.

The initial structure of the torso of the primate I made with Fimo black which allowed me to continuously model and alter until I had my final structure that I was happy with. I left within the oven to dry.

From here I went on, keeping always in mind to pay attention to the images and references I used for the anatomical study of Kong.

It is important to first organise the masses and volumes and then ultimately to work the details with epoxy paste, I normally use the following on their own and sometimes as a mixture:

I worked in the same way to create the  corset ( relief ) of Edgar Wallace which you see attached to the plinth . I tried to make it as similar as possible to the images that I found. 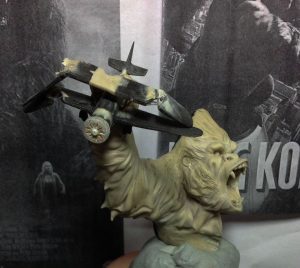 Once the sculpture was complete I proceeded to prepare it for fixing to the base, using a rotary tool on a very low speed, grinding away any superfluous areas of putty and achieving a nice finish with correct dimensions and scale.

A real coup of luck took place at this point as I had in my many boxes of modelling junk and random parts, two WWII  monoplane models! . The Endgame was in sight ….. I enjoyed creating a biplane with the necessary modifications and additions : tensioners, shape of the wings, creating second driver housing, propeller and rudder.

But it ‘s better to leave you with images, please enjoy the gallery. A good model and a good life for all. Thanks to Jason for the hospitality.