A tribute to the creator of Pinnochio, Carlo Collodi, by Antonio Leveque 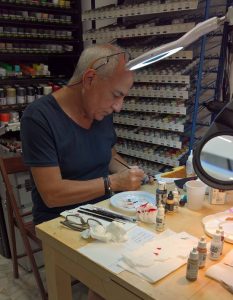 During my long years of being a “modest” sculptor of figurines I began to realise more and more, frozen snapshots of time, of Collodis’ character sketches. Carlo Collodi (actual name Carlo Lorenzini) became fascinated by the idea of using an amiable, rascally character as a means of expressing his own convictions through allegory.

In 1880 he began writing Storia di un burattino (“The story of a marionette”), also called Le avventure di Pinocchio, which was published weekly in Il Giornale per i Bambini, the first Italian newspaper for children. Pinocchio was adapted into a 1940 film by Disney that is considered to be one of Disney’s greatest. 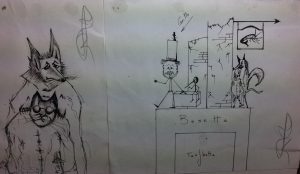 A few months back I wanted to do a tribute to Collodi, inserting him within one of the scenes, thus creating an interaction between author and his charming creations. The author becomes history within the history he created.

I began to do the preparatory sketches for the scene by imagining that everything happens at the famous Inn of the “Gambero Rosso” . It is here that Pinnochio is duped by the fox and cat, who he had met on the road. 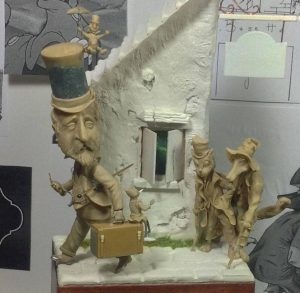 I tried replicating the scene as closely as possible, with Collodi to the rescue with his large suitcase, containing the novel and the poor puppet under the hateful gaze of the fox and cat. Last but not least the cricket also appears in the scene, who with her small umbrella is gliding down from Collodis’ hat.

I don’t wish to write a lot of words but to take this opportunity to show you the various steps of my project with a gallery of photos. However, there are a few things i would like to say.

Beginning with the setting, the facade of the Inn is made from plaster, with the bricks being carved in using a chisel, same process for creating the window recess.

The shape of the sign is cut from 3mm plasticard and copper wire is manipulated into shape to simulate the wrought iron. Collodi is 54mm in scale, the head caricature is about 150mm. All of my characters are sculpted with various putties including, A+B epoxy, Magic Sculpt, Apoxie Sculpt and Duro Sculpt. I always use a 0.8mm wire to set the underlying dummy (armature).

The loose fitting clothes were made with A+B, working on a hard, smooth surface with talcum powder to prevent adhesion. For all the rest there is no secret, just lots of patience, time and accepting that you will make mistakes, lots of them! It is the best way to learn and will always ensure the best results.

Anyway I just want to share with you the pictures of the process. For those wishing to see more of my work I am happy to invite you to my albums on Facebook.

Good modelism and a good life for all. Finally thanks to Jason for the opportunity to share my vision on this site.