A Beautiful Disaster (a Black Sailors Vignette) by Enrico Collenzini

The birth of this project started when I saw for the first time this amazing model on one of the KickStarter campaigns, carried out by Big Child Creatives (Black Sailors). As soon as I saw the pictures of this pirate orc I was delighted by this piece and I ordered it immediately! 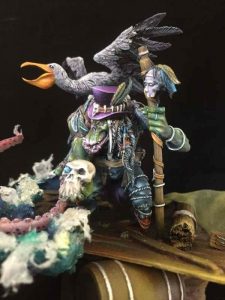 papa jambo in all his glory

Papa Jambo, his name, immediately took me into another world of fantasy, a world of pirates, sailors and warriors and I immediately imagined the place where this vignette would appear. Surely in some Caribbean island, perhaps in an extreme situation, such as after a shipwreck, during which the boat crashed on to a rock. A real disaster.

Fortunately our orc commander managed to escape and, in the company of his trusty monkey, he is forced to live life marooned on an island forgotten by everyone, where he managed to build a makeshift lodging and a small jetty, on which he can lookout to scan the sea and hope for some passing ship that would take him home.

Sometimes, however, he must pay attention, as some residents in the surrounding sea  could cause him some mischief. Huge octopuses in fact are the real masters of the sea around the small island, and certainly are not very happy of the new presence but at the same time, they see the new arrival as a playmate, with whom they can spend a few hours of their day.

The shipwreck was a disaster but, despite adversity and the loss of the ship, still not all is lost. The crystal clear sea, the company of his trusty monkey and the appearance of new friends to play with have made sure to turn this disaster into a “Beautiful Disaster”. 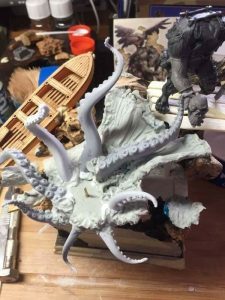 Base construction and developing the composition

The idea of how to realise the scene is born by observing a big piece of root of tree, given to me by a friend (a painter like myself). One of those roots that seems deliberately made to build upon and that could become the full support for the scene.

I started doing different tests by placing the various elements and trying to see what could be the best format to have general harmony in the scene and, at the same time, to focus on the protagonist of the whole piece, Papa Jambo.

The wooden platform has been converted from one envelope of material pieces of Historex containing a number of elements of external decorations for various environments. It was, like, the perfect piece for what I wanted to achieve.

If we think of a shipwreck after a violent impact on a rock, the image that immediately comes to mind are the large numbers of splintered wood pieces cast everywhere. Also the idea of including a little rescue lifeboat in the scene seemed to be perfect for my scene.

I liked a lot the idea of the octopus on a wave and I tried to play the shot so that it interacts with the main character and, in some way, would play with him. The greatest difficulty at this point was how to create the effect of a wave crashing on the wooden platform. 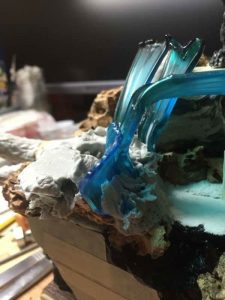 To realise the support of the wave I used some pieces of plastic forks. I broke the forks and I used only the final part of the handles. To give shape to each plastic handle, I heated with a flame being careful not to burn it completely. Once heated, the plastic becomes malleable and you can curl it and give it the desired shape, and that’s exactly what I did.

The hardest part was to place the plastic handles together with a first draft using grout. For this it was necessary to simultaneously place the octopus and all its tentacles in order to create and identify all of the tentacles bearing zones and ensure that one of the tentacles could draw over the orc’s arm so as to create an interaction between the two main figures.

It was not so easy to find the best position and solution for all elements, bearing in mind that none of these could be permanently attached to the base, they could only be supported in order that amendments could be made, whilst the putty was still fresh. This allows me to score and set the various wells on which to paste and to focus the various elements of the octopus. 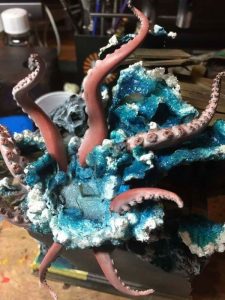 Another important element of the scene, the little lifeboat, had to be positioned so as not to disturb the rest of the elements, but it could have its own correct position and so harmonise and balance with the whole scene. The lifeboat had also become the element on which to place the pirate monkey, being always aware to the final composition in order to dedicate a section of the scene in the foreground.

The initial phase has been preparing the foundation of the whole environment. After giving a black primer on all the elements, it was given a first coat of white airbrushed on the most exposed points to start setting the stage lights and shadows.

In the next step I painted with airbrush several coats of colour on the various main elements of the scene. With a mixture of Brown + Ochre were given the basis of all the wooden elements. Then I switched to water giving a mixture of Blue + Green and White to the foam of the waves. Subsequently, the base colour was given to the upper part of the octopus and all the tentacles.

Well, at this point the base is ready to proceed with the oil painting. My favourite medium. 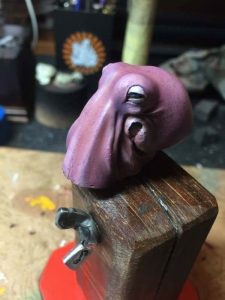 developing the colours and textures for the octopus

The octopus has been painted using a colour tone that was as close as possible to the real specimen. After seeing a large number of real octopus images on the web, I decided to use a shade of colour that came near to a mixture of purple, red and violet.

The colour was applied in different steps and of varying dilutions trying to blend the various tones and, in some way, to texture the skin of the octopus using a small piece of sponge, containing a little colour with darker tones. The effect was to get as close as possible to the real thing.

The wooden parts and the lifeboat were painted with Ochre to brown shades. Starting with a Burnt Sienna for the shaded parts, the parts were shaded using Ochre and Yellow was added to the more light parts.

For water, it was left the background colour applied by airbrush. I later worked on the  already coloured background with Tamiya water effects and  I also used silicone (the type used for sealing windows) to some areas where there was the need to creating more volume. At the end of this operation, several points have been adjusted with the oil colour to better define the areas in light and shadow of the waves and water. 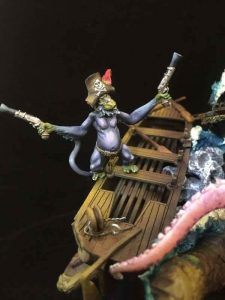 view of the painted wooden parts and trusty companion

For the orc, firstly base colours were airbrushed to set the highlight and shadow areas and volumes. Later I started to paint the various areas of the body with oils. The shades for the orc’s skin were created using different shades of Green mixed with Ochre and Yellow, this also helps to harmonise the figure with the rest of the scene.

To enrich the scene, I added some details in various positions, such as some sections of broken wood pieces of the ship, a net, the trunk with the treasure (included in  the Big Child kit), some beams of wood resting on the wooden platform and among the tentacles of the octopus.

Finally a little mouse on the wooden beam supported by a tentacle of the octopus adds more fun to the overall scene.

This work was very long but the final result is as I had in my mind. Of course, I can always do better, but overall I would say that I’m satisfied with the final result. Surely the use of oil colours does not make fast the process of painting which is normally much slower than acrylics but I prefer this type of medium to paint my miniatures. It reflects a bit the way I like to go about my painting, slowly, relaxed and at the same time to be able to still work on the colour and turn it to my liking.

I hope this article can be interesting and, in some way, can give some inspiration to all of you artists.
Special thanks to Jason who has allowed me to write and publish this new article on this beautiful website dedicated to all modellers. You can see the full gallery below of the SBS process!

For me it was an honour!